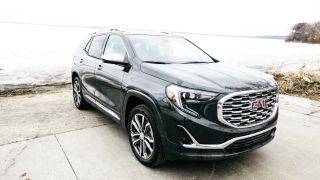 Modern drivers need all the help they can get in difficult conditions. A recent test of the 2018 GMC Terrain Denali, which has multiple collision detection systems, revealed that even in a downtown area with stop-and-go-traffic, the right alerts and warnings can save your skin.

The GMC Terrain uses an interesting approach to collision alerts, even if some of these features have been available in European brands like Volvo and BMW for many years.

In one morning commute, the vehicle spotted two conditions that seemed perilous and flashed a red light above the steering wheel. (This tech, called Forward Collision Alert, is part of the Driver Alert Package II in the Terrain, which adds $495 to the $37,600 base price.)

On the steering wheel, there’s a button you can use to adjust the gap distance, controlling how often you see alerts (either near, medium, or far).

With the far setting enabled, the Terrain seemed over-sensitive, and the warning light flashed red two different times when a car braked suddenly in traffic.

The system will also flash green if it sees any car near you, and amber if there’s a possible collision.

Red means that if you don’t react, an accident will happen. Fortunately, the Terrain also uses a technology called Low Speed Forward Automatic Braking. This system never engaged, but would brake for you if you didn’t notice the red light in the display up to a certain speed.

The red lights weren’t irritating at all – they snap you out of any deep thoughts, and they make you pay attention to the traffic a little closer – even for the next five to 10 minutes.

Collision detection is an incredibly important factor when it comes to autonomous cars.

The better the technology works – sensing dangers in a variety of conditions – the more likely it is that cities, drivers, and even car companies will deploy more AI in cars.

There is a lot of work to do, however. Recent crashes such as the one involving an Uber self-driving car and a pedestrian, and a second fatal crash involving a Tesla, have made collision detection systems even more important.

They work in a way that’s similar to the weather radar at your local weather station. On the Terrain, a radar sends out a signal and is constantly measuring gap distances.

Another setting, available in the main touchscreen, lets you enable whether you hear the alert or can feel the alert in your seat, which feels a bit like a rumble strip. Of course, you can also disable the collision detection altogether.

“Driver assistance features such as forward collision warning and lane-departure warning can help alert the driver to situations around the vehicle,” says Tom Wilkinson, a Senior Manager for Cybersecurity and Safety Communications at GMC. “Research by organizations like the Insurance Institute for Highway Safety show these and similar features have the potential to reduce the number and severity of crashes.”

You might wonder if it is all too much feedback. Yet, in testing all of the features, it became obvious that having multiple ways of alerting the driver makes perfect sense.

In the tests, there were times when a sound playing loudly on the radio was too distracting, and the lights worked better.

Take a closer look at the 2018 GMC Terrain Denali in the gallery below:

On The Road is TechRadar’s regular look at the latest tech in the hottest cars. John Brandon, a journalist who’s been writing about car tech for 12 years, puts a new car through its paces every week. One goal: To find out which new tech will lead us to fully autonomous cars.